Muso Jikiden Eishin-Ryu iaido is a traditional Japanese art of drawing the sword. 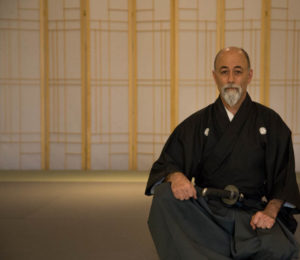 Muso Jikiden Eishin-Ryu iaido is a traditional Japanese art of drawing the sword. Our school, or ryu, is comprised of seven sets of prearranged techniques called waza or kata, depending on whether they are performed alone or with a partner. Waza sets are arranged to form shoden (initial-level), chuden (middle-level), and okuden (hidden/secret-level). Each waza has five distinct elements: drawing the sword (nukitsuke), raising the sword overhead in a defensive manner (furikaburi), the downward cut (kirioroshi), blood removal (chiburi), and replacing the sword in its scabbard (noto). Each waza has a scenario or practical application that explains, informs, and clarifies the movements. Historically, these varied drawing and cutting applications would have prepared the samurai for nearly any situation that might arise.

Developed over four hundred and fifty years ago, certain forms of Muso Jikiden Eishin-Ryu have changed little. As such, the Mountain Wind Dojo’s curriculum and instructional objectives reach far beyond the waza of Eishin-Ryu, extending into traditional Japanese culture and history and iconology. Only by studying Japanese history and culture can one begin to understand the finer aspects of iaido.

Practicing iaido is a personal and spiritual journey that is complimentary to any religious or spiritual worldview. Iaido can be is a vehicle for one's life journey. Constantly humbling in its precision, iaido students must confront their own demons in order to let go of their delusions. This is reflected by the translation of the three characters, or ideograms that comprise Iaido:

Assembled, the ideograms in iaido can translate as "the way to meet with one's own existence." Not what a newcomer might expect as the translation for the name of a sword art that seems outwardly aggressive despite its gracefulness.

Muso Jikiden Eishin-Ryu is a school steeped in traditional Japanese values. The translation of the of the name of the school indicates its gravity:

Training in iaido will increase your physical fitness, improve your balance and core strength. Most importantly iaido will stir your soul. Because our art is practiced as a form of moving meditation, iaidoka, or (iaido practitioners) in our dojo are often asked to contemplate the metaphor of the sword and its motions. Our dojo community is pleased to invite you to watch some classes and decide whether you want to commit yourself to study.

Jinsuke Shigenobu (1546-1641) is the man generally credited with creating what is now called iaido. He grew up in an age of constant warfare and had almost certainly been exposed to various battle-tested styles of swordsmanship. Seeking divine inspiration, he traveled to Yamagata prefecture and engaged in austerities and prayer at the Hayashizaki Shrine. He received the divine enlightenment that he sought in the form of a system of drawing the sword and cutting in one motion. His experience was so profoundly powerful that he renamed himself Hayashizaki after the the shrine. He then founded the Shimmei Muso-Ryu (divinely inspired, unparalleled school). In his honor, his students renamed the style Shimmei Muso Hayashizaki-Ryu, adding his name to the style.

It is true that other schools such as Tenshin Shoden Katori Shinto-Ryu had been previously practicing some techniques that utilize a quick-draw, but Jinsuke Hayashizaki Shigenobu is generally credited with creating what has become modern iaido. This may be because his entire system was based on the quick-draw, rather than incorporating it sparingly, as other earlier sword arts did. Most historians agree that Muso Jikiden Eishin-Ryu claims the most direct lineage, which traces its roots directly, in an unbroken chain of headmasters, back to Jinsuke Hayashizaki Shigenobu's system.

Later, the seventh headmaster of the system, named Hasega Eishin structured the techniques into shoden, chuden, and okuden. He also added sets of techniques that employ a raised knee posture called tatehiza. These changes, coupled with his outstanding skill, inspired a change of the school's name from Shimmei Muso Hayashizaki-Ryu to Muso Jikiden Eishin-Ryu. The famed student of Eishin, Oe Masamichi, made the name change in his honor. Also, adding Jikiden to the name indicates that the style is to be handed down directly from teacher to student. This is one of the reasons that the performance of advanced, or secret techniques, is forbidden outside of the dojo. The other reason for not showing techniques outside the dojo traces its roots to a need that arose in medieval Japan to keep the teachings of a particular school guarded so as to ensure its strategic advantage.

Other Schools Of The Hayashizaki Line

Below is a list of the other schools that have stemmed from Jinsuke's lineage. Most of these are extremely rare in Japan today. Some of them are no longer practiced and have gone extinct. It is our sincere hope that Mountain Wind Dojo might play some small part in preserving Muso Jikiden Eishin-Ryu.

Bangai Waza (Beyond the Numbers) Expand

This donation is the equivalent of family monthly tuition.
Thank you for your generosity, please choose your donation method below.

This donation is the equivalent of a student's monthly tuition.
Thank you for your generosity, please choose your donation method below.

This donation is the equivalent of a student's monthly Iaido tuition.
Thank you for your generosity, please choose your donation method below.

This donation is the equivalent of a mat fee.
Thank you for your generosity, please choose your donation method below.

Thank you for your generosity, please choose your donation method below.